Backup Camera,Backup Sensor,Bluetooth,Heated Leather Seats,Leather Seats,Memory Seat(s),Navigation System,Passenger Climate Control,Remote Start The listed price includes $1,000 Pettus Automotive Trade Assistance (trade must be 2012 or newer) and does not include our $499 admin fee. Tax, title, and license are extra. We try to ensure our pricing is accurate and up to date. We occasionally make a data entry or human error that can affect the accuracy of our online information. Please call us to confirm pricing and availability on any vehicle before visiting.

Model Overview
The 2015 Fusion is all about drivetrain options. Buyers have many engine and transmission choices, all of which produce stellar fuel economy. Engines include a 2.5L 4-cylinder, a 1.5L 4-cylinder turbo, a 2.0L 4-cylinder turbo, a 2.0L 4-cylinder hybrid and a plug-in hybrid system. A 6-speed automatic transmission is mated to them all, and the Fusion is available in all-wheel drive.
For those looking for efficiency, the Hybrid, Energi plug-in hybrid, and 1.5L turbo are the engines of choice. The 1.5 turbocharged engine returns up to 37 mpg on the highway. The Fusion Hybrid is more efficient and will sip gasoline to the tune of 47 mpg in the city and 44 mpg on the highway. Finally the Energi plug-in hybrid is capable of running only on electricity for shorter trips, potentially limiting gasoline consumption to almost nothing.

The Fusion comes in three basic trims: S, SE and Titanium. S models are the most basic, but still come nicely equipped as is appropriate for a midsized sedan. The basic 2.5L engine is the only engine available on S models. Features include power door locks and windows, halogen projector headlamps, a tilting and telescoping steering wheel and a trip computer. Ford's SYNC system is standard, as is an MP3-capable stereo with an auxiliary input jack, along with a rearview camera. The stereo and the cruise control can be operated by buttons mounted on the steering wheel.

The SE model enhances the level of basic equipment and also allows buyers to choose from some more drivetrain options. The 1.5L turbo, the 2.0L turbo and the 2.0L Hybrid are all options for the SE. Standard equipment on the SE includes a 10-way power adjustable driver's seat, heated mirrors and 17-inch wheels.

Stepping up to the Titanium edition will bring buyers a more luxury-oriented Fusion. Starting at just under $31,000, the Titanium edition comes with the powerful 2.0L turbocharged engine and is the only model available with all-wheel drive. 18-inch polished aluminum wheels are standard. Seating surfaces are leather and heated, and a 12-speaker Sony audio system with satellite radio provides in-car entertainment. SYNC systems on the Titanium also include MyFord Touch, meaning there is an 8-inch LCD touchscreen in the center console that houses the optional navigation system. Two smaller configurable LCD screens are also embedded in the instrument cluster. 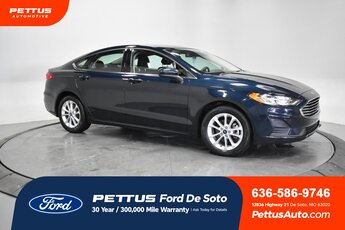